Mike
Northern California, United States
A rented bike in Bruges re-introduced me to how fun casual cycling can be. My best cycling outings are with my lovely wife and darling daughter. After buying a 70s-era Mercier mixte, I was smitten with vintage bikes and accessories. This blog seeks to share those interests with you and occupy some of the time now devoted to obsessively buying bicycles and gear! 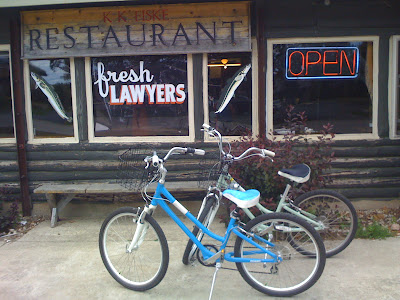 Door County, Wisconsin is as beautiful as anywhere I've seen.  And Washington Island, just off the tip of the peninsula, might be the nicest part of it all.  We took the ferry to the island and rented bicycles, the hybrid/comfort things you see in the photo.  These are the bikes the girls rode, mine was under me as I took the photo, I think. They weren't bikes I'd be in a hurry to own, but for reasonably-priced rentals, they did the job. 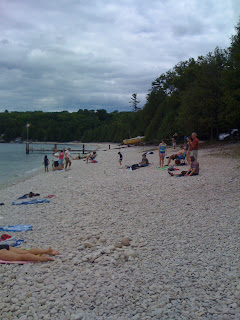 We rode the length of the island, which was not really as great a feat as it sounds.  At the northern end, we lounged at Schoolhouse Beach, which is covered not in sand, but in perfectly smooth, white stones.  I'll say this about stone beaches -- they look much more inviting than they feel.  Sitting on rocks, even smooth ones, isn't that great a treat.  But man, did those rocks look cool.

Fiona swam in the icy Lake Michigan water.  Her mom and dad were content to watch from the beach, where they struggled to get comfortable and kept wondering how much better life would have been if we'd thought to bring a towel with us.  Or a bathing suit. 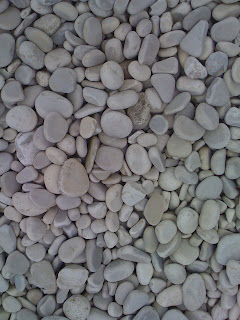 When Fiona gets a blog, she can tell you how it felt to swim in her clothes and then get on a bicycle and ride back to the ferry.  I'm guessing it wasn't too comfortable.  But as always, our little trouper (or is it trooper?) was very stingy with complaints.  I admire that about her greatly.

Back to the lawyers -- they're a fish, in case that wasn't clear from the window art. Their more official name is burbot and they're a kind of catfish/eel combination.  Yes, I realize that catfish/eel might be the least attractive combination in all the animal kingdom, but we were spared their unfortunate faces when dining on them.  They're basically a cod-like fish, so they were perfectly tasty in a cod-like way.

The owner of this neat little roadside restaurant assured me that the "fresh lawyers" sign is perhaps the most photographed spot on Washington Island.
Posted by Mike at 10:03 AM 1 comment:

A low rate of return

Remember when Ikea gave each of its U.S. employees a bicycle late last year?

The company told employees the bicycles were "our way of saying ‘thanks IKEA co-workers for being strongly committed to working together.’ We hope this bike will be taken in the spirit of the season while supporting a healthy lifestyle and everyday sustainable transport.”

There was a fair amount of tongue-clucking at the time on bike blogs about how cheap the bikes seemed to be.  And I can't argue with that; the bikes seem to be pretty cheap.  But really, what did your employer give your for Christmas last year?  I think the best gift I ever got from an employer was a turkey or Honey Baked Ham.  So, you know, good for Ikea.

But it would appear -- in West Sacramento, at least -- that the bikes may not have kicked off the pedal-to-work craze Ikea may have hoped for.  On a recent visit to the store I found this lonely bicycle locked to the rack.  One. 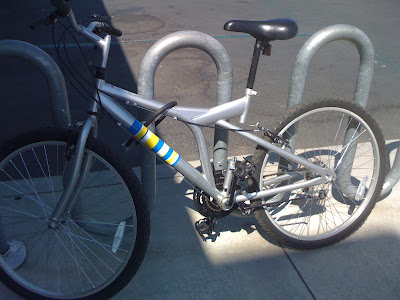 Ikea stores tend not to be nestled in neighborhoods and the West Sac store is no exception.  If you were going to cycle to work, you'd have some hairy moments on Reed Avenue and the like.  So I guess it's not too surprising that there weren't a dozen of these waiting outside for shift change.

At least one employee is getting some use out of his or her free bike, and that's a good thing.
Posted by Mike at 10:55 PM No comments: 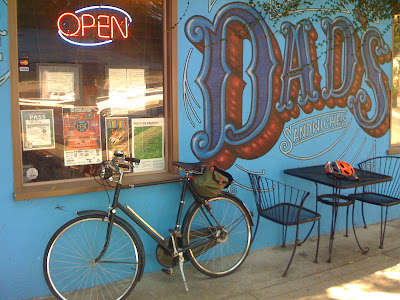 I liked the look of this colorful wall and the contrast with the oldest of my bikes. 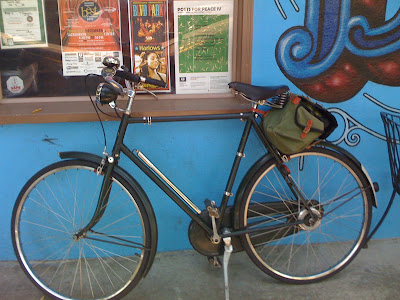 They make a pretty good reuben sandwich too.
Posted by Mike at 7:57 PM 3 comments: 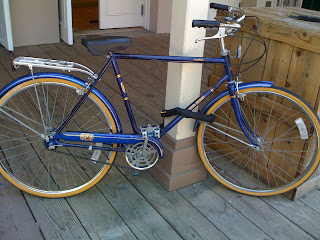 I still miss my burgundy Free Spirit three speed from time to time.  It didn't have the solid feel of the Raleighs, but it was a lovely color and somewhat lighter.  There was a simplicity to it that made me happy.

So, when I saw this blue version parked near my office, I got a little bit nostalgic.  It seems to be from exactly the same era as mine.  The blue is named "Sheffield," which I certainly prefer to the ambiguous "Brittany" name given to the burgundy model.

As I stood taking photos of the bike, its owner appeared in the person of this smiley, pretty store clerk.  She strode up to me and said brightly, "thank you so much for being interested in my bike... I love it." 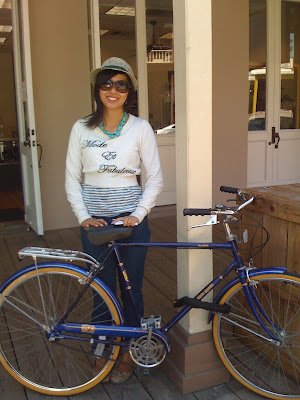 And she should.  It's in great condition and it's being very well protected with a serious chain.  It would take some work to liberate this Free Spirit and ride off.

Lighting in a pinch 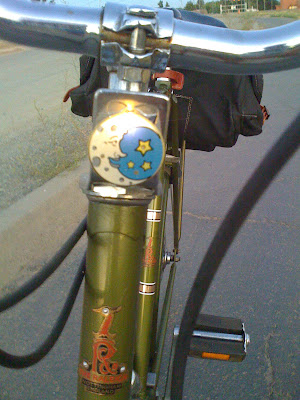 The shortened days of autumn caught me off guard recently when I rode to work before realizing it would be dark before I returned home.  Naturally, the many battery-powered lights I've bought, including a few Knogs and Planet Bike models, were all safely at home on other bikes.

I'm caught somewhere between buying enough lights so each bike has a set on it at all times and remembering to switch the ones I have between bikes as a new one is selected each day.  This is a distinct disadvantage to not having a dedicated commuter bike or even having just one bike, as most normal people do.

Anyway, I came up with an interesting solution to my lighting program.  My office is in the same suite as the offices for some retail shops in the touristy part of town.  On any given day, there are dozens of boxes of merchandise intended for sale at some street festival or another.

Luckily, this week's collection of China-made novelties included those little flashing lights that you "wear" by putting a magnetic disk beneath your collar or lapel to hold the flashing button in place.  I borrowed a pair of these, attaching one to the rear fender and the other to the heron-emblazoned light fixture on my Raleigh Superbe.

Here's what the rear light looked like at the beginning of my ride: 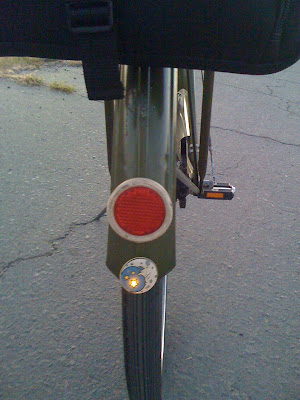 Of course, they did nothing to illuminate the road or bike path for me, but nearly all the tricky sections of my commute were finished before it was more than twilight.

By the finish, though, they were making me feel a lot better about my chances of being seen by motorists.  Here's what the front light looked like by the end of the ride: 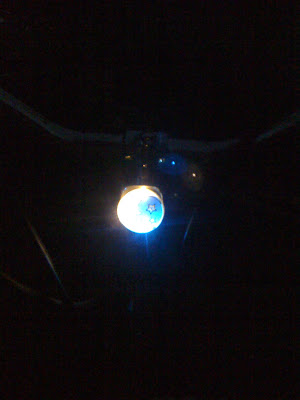 Does anybody know just how difficult or expensive it is to rig full-time lighting on a vintage bike? I have no interest in investing in new or dynamo hubs, so I'm thinking it would be bottle generators or just a wider collection of Knogs and the like.  Any suggestions are appreciated.
Posted by Mike at 11:23 PM No comments:

Finally, a three speed in Ireland 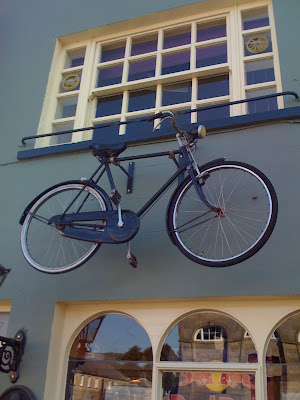 As a collector/rider of Raleigh three-speeds, I was very excited about the promise of seeing tons of my beloved bikes on our trip to Ireland.  Just as vintage Schwinns seemed to be locked to every bike rack in Chicago, so too would Raleighs, Rudges, Humbers and Triumphs be chained to every footpath tree in Belfast, I reckoned.

Not true, it turns out.  Cycling in the north of Ireland in September was, well, difficult to detect.  On the road to and from Ballycastle, we encountered a dozen or so road cyclists on modern road bikes and wearing full cycling kit. After that, nothing.  Well, there was the occasional kid on a department store mountain bike and once there was a pair of muddy mountain bikes on the back of a Range Rover near Glenarife Forest, but pretty much nothing.

To be fair, we spent less time in the tonier spots of Belfast than our itinerary originally called for.  So, it's possible there was a wealth of bicycle commuters around Queens University that went unseen by us.  But based on my limited data, I concluded that bicycle commuting was almost nil.

One cousin offered an interesting explanation.  Riding a bicycle in the bad old days of his youth meant being vulnerable in a city that offered too many ways to meet with trouble.  Better to be on foot or in a car/bus, he said.  I don't know how much stock to put in that, but I certainly don't have the credentials to dispute it either.

As for the country roads -- those bucolic, winding paths through pastures and rolling hills that I was certain would be teeming with tweed-clad versions of myself -- I think I know why those were bicycle free.  About the 100th time I met a 2-meter wide vehicle coming toward me at 60 mph on a 3.5-meter wide country lane, I realized that cycling these roads would require nerves of steel.

Maybe those videos of English cyclists were just propaganda by British Rail.  Or maybe it's different in England and they're donning plus-fours and cycling away.  But in Ireland, I saw bugger all when it came to vintage bikes and country cycling. 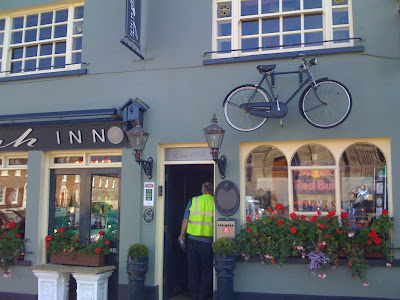 Until, that is, I came across a 1950s Raleigh three speed with full chaincase and original components -- hanging from the wall of a pub in Hillsborough, up the street from my family's pub.  I saw exactly one vintage bike in Ireland and it was wall art.  Oh well.  Thankfully, there's more to life and to vacations than cycling.
Posted by Mike at 12:52 PM 3 comments: 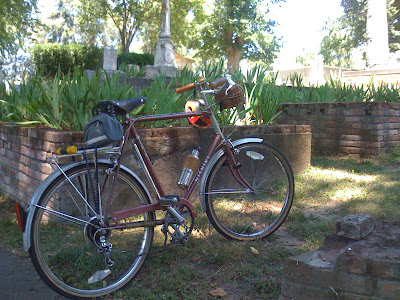 There are few places more tranquil and bucolic in Sacramento than the City Cemetery.  It may seem odd to choose this as a cycling destination, but the beautifully cultivated gardens and abundance of shade trees make it ideal for a gentle ride on a warm day.

For a time, our family volunteered to take care of one of the many plots in the historic cemetery.  We "adopted" the Hatch family plot, and tried to keep the 19th century graves tidy and adorned by blossoming shrubs and flowers.   After a year or so, relatives of the Hatches returned to town and asked to see to the graves themselves.  Naturally, we happily stepped aside. One day, we'll find a new plot and resume the happy gardening project. 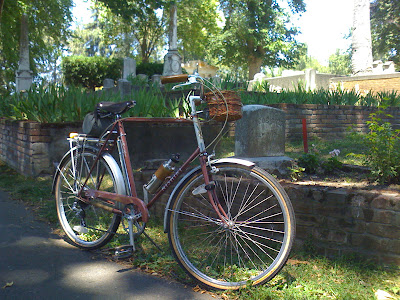 In the meantime, I still like to visit from time to time and ride slowly up the small hills and around the gently winding paths.  The way I see it, some of the cemetery's residents have been lying there since the 1850s and quite likely appreciate company of any kind by this time.  I ride for a while and then find a shady bench to check emails and maybe have a snack before riding back to the office.

On this visit, I brought Takumashi, my 1970s Nishiki Citisport.  I think he's looking just about perfect now with cork grips, a VO leather saddle and twined accessories.
Posted by Mike at 2:57 PM 2 comments: